A History of European Mass Spectrometry 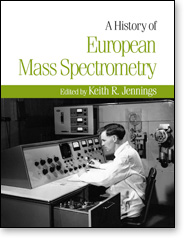 The construction of Thompson’s mass spectrograph in Cambridge almost exactly a century ago followed by Aston’s improved instruments and his pioneering work on non-radioactive isotopes is widely known. In the sixty years or so since then, European scientists and engineers have made many major contributions to the development of new instruments and techniques. Accounts of these contributions in the scientific literature necessarily give little idea of the contributors themselves or of the difficulties that had to be overcome before success was achieved.

Most newcomers to mass spectrometry in the last ten years will have little concept of the difficulties faced in obtaining the mass spectra of four solid samples during a working day before the invention of the vacuum lock probe. This was followed by several hours of counting spectra and trying to interpret them. Many will never have seen a magnetic deflection instrument and will be familiar only with mass spectrometers having both the operation of the instrument and the interpretation of the data under computer control.

This book aims to give an insight into how some of the more important developments came about, from the advent of the first commercial instruments to the present day. The various accounts, several of which contain personal reminiscences, both provide a human background to these developments and convey the excitement of being part of the European mass spectrometry community during this period.